I’d like to tell you about the area where I was born and write about, East London. 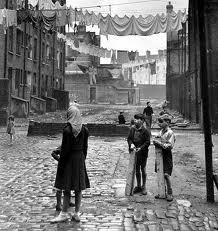 The Fullertons came to the Wapping area of East London from Rothesay in Scotland in the 1820s and my great-great-great grandmother, Elizabeth Fullerton, is shown on the 1841 census as living in Star Lane at the back of Cable Street. It was natural then when I started writing eleven years ago that I looked no further than my own backyard for inspiration. Why wouldn’t I, when East London has such a rich vein of pageant and spectacle? Add to that the river pirates, the gangs, pubs and music halls that were a feature of the teaming waterfront and there’s drama enough for any writer.

This is why East London is a character in its own right in all my stories. My first book No Cure for Love features such delights as the White Swan known locally as Paddy’s Goose, which was the notorious public house at the corner of Ensign Street. My Victorian characters regularly dash along the Highway and up and down Old Gravel Lane or Wapping High Street and Millie in, Call Nurse Millie, cycles along the very same streets. Whereas in my previous books my characters duck behind the Raines Memorial in St George’s-in-the-East’s graveyard to avoid the police, Millie’s mum is a Mother’s Union member in the same church although minus it roof as it was blown off by an incendiary bomb in 1942. Millie and her mum also shop in Watney Market as Ellen and Mattie did before them. In my third book Perhaps Tomorrow our heroine finds herself incarcerated in the damp women’s cells under Wapping Police Station and Alex Nolan, the hero in Call Nurse Millie, is a police constable at the same station. I also have Millie’s mum living in the same house that Ellen lived in a century earlier. Kate Ellis’s workingman’s eating house from Hold on to Hope survives as Kate’s Café where Millie and her fellow District Nurse meet for a cuppa mid-morning.

Of course, I have invented places too, such as the Boatman grogshop where Ma Tugman runs her murderous empire in A Glimpse at Happiness now has Vi White as a more respectable landlord. 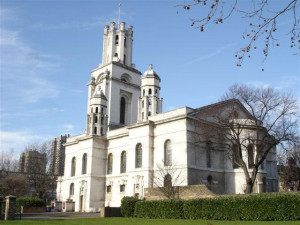 St George’s in the East the Fullerton Family Church

And Munroe House, named after the founder of the St George’s and St Dunstan’s District Nursing Association Miss Robina Munroe, Ellen and Robert’s daughter from No Cure for Love. But in truth even the places and people created in my imagination probably had their real life counter parts.

Of course, for many in modern East London the world I write is a far cry from the pleasant residential area of East London of today but sometimes, in the dusk or on a foggy night, if you’re quick you might just catch a glimpse of one of my characters hurrying home out of the corner of your eyes.