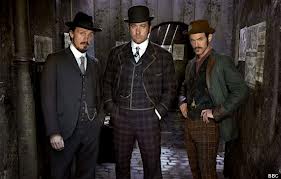 Sir Arthur Conan Doyle sent Sherlock Holmes to Whitechapel and Limehouse as part of his investigations and the brothels and gambling dens were the perfect places for Oscar Wilde’s anti-hero Dorian Grey to indulge in his hedonistic streak. And how many Jack the Ripper-based stories have there been including the recent ITV series Whitechapel?

But it isn’t only outsiders who have tapped into the East Ends melting pot of humanity for stories. Local authors, too, have brought the poverty and vibrancy of the area to life. The most famous of these must be Arthur Morrison’s A Child of the Jago set in the abject poverty of the Old Nicol at the top end of Brick Lane and Tales of Mean Streets set further South around the docks. 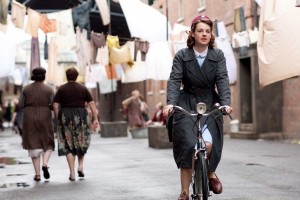 There’s also a huge history of Jewish writing in Whitechapel and Spitalfields with acclaimed authors like Israel Zangwill who although known chiefly for his Children of the Ghetto also had considerable success with his earlier work The Big Bow Mystery , a detective story that was made into a film three times. Jewish writer Alexander Baron’s gangland novel, The Lowlife, set in Hackney explored gambling, prostitution and crime much as Lock Stock and Two Smoking Barrels did five decades later.

But there’s humanity too amongst the grit and sweat as portrayed in A Kid for Two Farthings by Wolf Mankowitz, is played out around the old Spitalfields market. My favourite book looking at Jewish East London is Journey Through A Small Planet by Emanuel Litvinoff, which manages to portray the grinding poverty of the area with much humour.
More recently the influx of immigrants have filled the old rookery streets around Brick Lane with new stories such as Monica Ali’s Brick Lane and Salman Rushdie’s controversial The Satanic Verses set in the Bangladesh community of Spitalfields.

So why does East London seem to have the lion’s share of London stories, you might ask? Well, that’s easy; because we have it all. Crime and the police, prostitution and missionaries, gambling and world-wide trade, the docks and the river thieves, costermongers and shopkeeper and refugees from all over the world and the native East Enders, anarchists and politicians and in fact, if we needed them for a story line, we could even have royalty shipped in from up river so it’s small wonder for the last two hundred years writers, like myself, have looked East for inspiration.