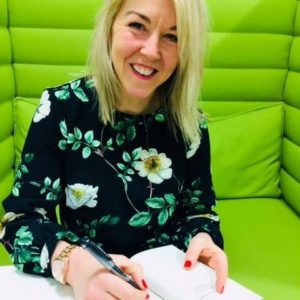 Hi, Kate, could you give us an overview of your writing career so far?

Hi Jean. I trained as a journalist and spent twenty years working for women’s weekly titles like Pick Me Up, Take a Break and That’s Life! which was a wonderful training ground in the art of listening, as well as an insight into what women really want to read about. I also did spells at The Daily Mail and The Daily Express. I was Deputy Editor at Pick Me Up magazine when I was made redundant. I was heavily pregnant with my second son and it felt pretty catastrophic at the time. In panic mode, I launched myself into the world of freelancing. A friend of mine was working as a ghostwriter and put me in touch with her agent, Diane Banks. She took me on and after working as a ghostwriter on five books, my agent suggested I try my hand at fiction. Now I look back and see that redundancy as serendipity, as there as is nothing I would rather do more now than write books.

2) What is it about the WW2 that fascinates you so much?

I think lives were lived so much more intensely and there was real potency and power to being a woman. Women really did step outside the home and discover what they were capable of. I interviewed a fascinating lady who was one of a handful of women to train as a doctor during the war. She leant forward in her chair and I was taken aback by the fierce determination in her voice when she told me: ‘In wartime, it was women who saved the day.’ It’s extraordinary when you think about it the way we carried on in a time when invasion seemed certain, and yet for so many, defeat simply wasn’t an option.

3) Why do you think this period is so popular at the moment?

We live in such uncertain times. Immersing yourself in the warmth and nostalgia of the past can feel like an escape from the frightening realities we face when we switch on the news. Reading about a time when a country pulled together to face a common enemy and people lived collectively, not individually, offers an unshifting narrative. Obviously we are looking back through a rose tinted prism, can you imagine the realities of actually living in a war zone? Despite this, I don’t think there’s any doubt that communities were much closer back then, and in the absence of the Welfare State, women were the welfare state, caring for neighbours and family. I think there is a tangible sense of people craving the benefits of living in a tight-knit community.

4) What is a typical writing day for you?

I drop the boys off to school, walk my ageing Jack Russell, Twinkle, then make a big cup of coffee, park my bum down and write until it is time to collect them. If I’m on a research day in the East End, I’m usually legging it up Whitechapel High Street en route to an interview or an archive.

5) Are you a plotter or do you write the story by the skin of your pants?

I’m a plotter and something of a control freak. I admire people who can discover it as they go along, but that would freak me out. I start with a timeline and a detailed bio of each of my characters and go from there, combining research with writing.

6) What has been the highlight of becoming a published author?

Good question. Nothing beats seeing your book on the shelves, or receiving a letter or email from a reader who enjoyed your book.

7) Apart from writing what else do you do in your spare time?

My sons are 10 and 6, so a lot of time is spent running them to football, karate and swimming clubs. I do love running and exercise. I bought a stand-up paddle board last year, which I absolutely love. On the river it is great, but we took it down to Dorset  last Easter and trying to stand up on it on the sea is another thing altogether. I spent most of the time face planting straight into the sea. I’m a bit of a fresh air and nature nut and it’s lovely to be outdoors when you’ve spent hours in front of a PC.

8) Have you any advice for aspiring Saga writers?

Only to write about an area, or people for whom you have profound respect and affection for. I also think you have a duty of care to research that time frame as vigorously as you can. People do love to spot anachronisms so take care to make your writing as authentic as possible. I have lots of trusted wartime East Enders who do what I call ‘sympathy reads’ to make sure my writing is as accurate as can be. Also, be prepared to embrace and utilise social media.

9) Can you tell us a little about The Allotment Girls?

When I stumbled upon a gem, like the iconic Bryant & May match factory in Bow, I knew firstly I had to set a book there. Next, I accessed the archives held at Hackney Library and started to read about the factory, its long history, its role during the war and its many social opportunities, like The Match Girls Club, and these vivid characters started to drop into my mind. Shortly after I discovered the Bethnal Green Producers’ Association, which during the war saw 300 men, women and children from the borough transform the darkest of bomb sites into thriving allotments, using elbow grease, imagination and pierced dustbin lids to sift out shrapnel. I had the beginnings of my story and the Allotment Girls was born. An allotment is a great stage for drama, all manner of illicit liaisons can take place there and secrets concealed beneath the soil.

Thanks for being part of my blog tour, Jean. 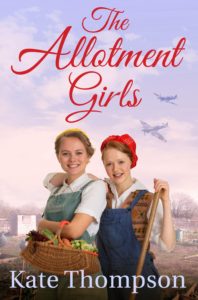 Read more about Kate and her books:

The Allotment Girls, published by Pan Macmillan is out March 22nd. Available to order now on e-book via Amazon.