Interview with Jo Brogan; heroine of A Ration Book Christmas

It’s just after lunch and I’m in the back yard of Garfield’s Village store in Melton Winchet  and I’ve just spotted Jo Brogan, the person I’m waiting to see, walk out the back door. 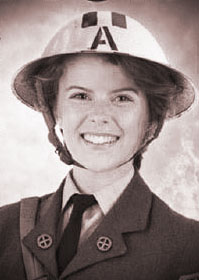 Jo: ‘Sure, but I can’t be too long as that old battleaxe Mrs Garfield will be after me for dawdling.’

Me: You’re from London originally aren’t you?’

Jo: ‘I am, East London down by the docks in Wapping but I suppose you can tell that from the accent.’

Me: Well I can hear a bit of a cockney twange although with a name like Brogan I thought you might be Irish.’

Jo: ‘My gran is, she came over to England when she was carrying me dad.’

Me: ‘So if you’re from Wapping what are you doing in the wilds of Essex working in the village shop?’

Me: aren’t you a bit old for that?

Jo: ‘That’s what I told mum but she said she needed me to look after Billy but the real reason she packed me off to the country is because my interfering sister Mattie told her about me and Tommy.’

Me: ‘Not Reggie Sweete’s brother!’

Jo: ‘Yes. And I know Reggie’s a wrong’un and even though he’s done a stint in borstal, Tommy’s not like his brother at all.’

Jo: ‘I don’t care I love Tommy and he loves me. Since I’ve been away he’s written me such lovely letter almost every day.’

Me: ‘Did you get one this morning?’

Jo: ‘Actually, I haven’t had one for a couple of weeks but I’m not worried. There’s a war on, you know, so his letters could have be destroyed a sorting office fire or the mail train could have been bombed but I’m sure I’ll get another one any day now and as soon as I can figure out a way of getting home I’ll prove to everyone what a grand chap Tommy Sweete really is. I’d better go. I’ve got a ton of deliveries this afternoon and I need to get back before Billy gets home from school to stop old Nutty Beech the local copper, will be picking on him ’

Me: ‘By, Jo, have a nice afternoon and I hope you hear from Tommy very soon.’

Jo: ‘I’d better or I’ll be knocking on his door demanding to know why?’ 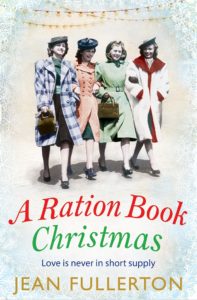 Ration Book Christmas. In the darkest days of the Blitz, Christmas is more important than ever.

With Christmas 1940 approaching, the Brogan family of London’s East End are braving the horrors of the Blitz. With the men away fighting for King and Country and the ever-present dangers of the German Luftwaffe’s nightly reign of death and destruction, the family must do all they can to keep a stiff upper lip.

For Jo, the youngest of the Brogan sisters, the perils of war also offer a new-found freedom. Jo falls in love with Tommy, a man known for his dangerous reputation as much as his charm. But as the falling bombs devastate their neighbourhood and rationing begins to bite, will the Brogans manage to pull together a traditional family Christmas? And will Jo find the love and security she seeks in a time of such grave peril?

48 Responses to Interview with Jo Brogan; heroine of A Ration Book Christmas