Win a signed copy of A Ration Book Childhood 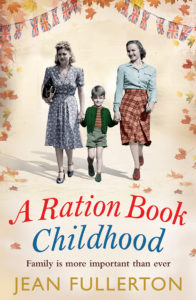 As ever, at seven thirty on a working day, the signature tune of the BBC Home Service’s Up in the Morning Early programme drifted out from the Bush radio on the dresser. Ida Brogan, already dressed in her workday skirt and jumper and with her bouncy chestnut-brown hair encased in a turban scarf, flipped a slice of yesterday’s bread in the frying pan.

It was the second Monday in October and Ida was standing in the kitchen of number 25 Mafeking Terrace, the three-up three-down Victorian workman’s cottage that had been her family’s home for the past dozen years.

Mafeking Terrace was situated between Cable Street to the south and the Highway to the north, just a short walk from London Docks. The narrow street was lined on both sides by houses identical to Ida’s. Every front door opened straight on to the pavement, without the benefit of a small garden or railing for privacy, while at the rear, each house had just a square paved yard with an outside toilet. A shared alleyway ran between each house and the one either to the left or to the right of it.

Before Chamberlain announced the country was at war with Germany a little over two years ago, families used the open space behind their homes to store their prams, tools and bicycles, but now the small yards were cluttered with stirrup pumps and sand-filled buckets ready to extinguish incendiary bombs, while barrels filled with soil were used for growing potatoes and iron drinking troughs for sprouting winter cabbage.

Life in the street had changed, too, since that fateful broadcast to the nation. Men had received their call-up papers and had gone off to the army, Ida’s eldest son Charlie among them, while children and expectant mothers and those with babes in arms were evacuated to the country.

Last year, when the Luftwaffe blitzed East London nightly, the Brogans’ terraced house had been packed to the gunnels as all the family took shelter there, but now that her two eldest daughters, Mattie and Cathy, were married with babes of their own, there was more room to spread out. Jo, her youngest daughter, had a bedroom to herself at the front of the house while Billy, the baby of the family, no longer had to share with his big brother.

Of course, as Queenie, Ida’s argumentative and contrary mother-in-law, occupied the front parlor, it was still a bit of a squeeze, but they were better off than many of their neighbours, who might emerge from their shelters after a visit from the Luftwaffe to find their houses reduced to a pile of rubble and all their worldly goods gone.

The blackout would still be in force for another hour, so the curtains across the window overlooking their backyard were closed as was the one across the back door. Therefore, the room where the Brogan family ate their meals, drank tea and exchanged gossip was illuminated by a 40-watt bulb which hung from the ceiling above. What with the blackout coming into force at half five in the evening and lasting until most people were arriving at work in the morning, you barely had time to draw back the curtains before you had to shut them again. What with that and the low-wattage output from the power station to conserve coal for the factories, the inhabitants of East London – well, in fact the whole country – were living in a dull twilight land.

‘Looks like the fog’s lifting,’ said Jerimiah, dabbing his freshly shaven face as he stood by the sink in his trousers and vest.

Ida raised her eyes from his breakfast sizzling in the lard and studied her husband of twenty-five years.

At forty-four Jerimiah Boniface Brogan was two years older that her and although he sported a few grey hairs at his temple and amongst the curls on his chest, he was as easy on the eye as he had been when they’d met all those years ago. A lifetime of heaving discarded household items on and off the back of his wagon meant his big-boned frame was still tightly packed with muscle and he towered above most of the men in the area by a good three inches.

‘Pity,’ said Ida. ‘The German bombers are bound to be back to night, then.’

‘Pity too,’ he winked, ‘because I was hoping perhaps to have another night with you in the same bed.’

Suppressing a smile, Ida turned her attention back to the frying pan.

‘Honestly, Jerry, fancy thinking of such things and at your time of life.’

‘What can you be meaning, woman?’ he replied, an expression of incredulity spreading across his square-boned face. ‘I’m as frisky as a man half me age.’

‘Are you now?’ said Ida, making a play of moving the pan on the gas.

He flipped the towel over his shoulder and, striding across the space between them, grabbed her around the waist.

‘Sure, don’t you know the truth of it, me Lovely girl?’ he said, pressing himself against her. ‘And a woman of your age shouldn’t be complaining either.’

‘Get away with you,’ she laughed, shoving him. ‘I’m the mother of four grown-up children not some slip of a girl to be dazzled by your Irish charm.’

‘That you may be,’ he replied, nuzzling her neck, ‘but you’re still a pleasing armful.’ He gave her an exaggerated kiss. ‘And as to my Irish charm: isn’t it the very same reason we have a quiversful in the first place.’

Laughing, she pushed him away again and he released her.

With his dark eyes still twinkling, Jerimiah grabbed his canvas shirt that was draped over the back of the chair and shrugged it on.