Win a signed copy of A Ration Book Wedding 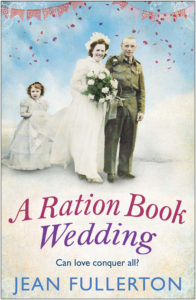 Francesca Fabrino, Fran to her friends, grasped the lever just above her and pulled it down, watching through the Perspex lens of her goggles as the drill bit bored a hole into the solid cylinder of metal. Feeling the tip of the bit reach its goal, she quickly released her hold and allowed the spring to raise the mechanism. She pressed the pedal by her right foot and the component – designed to allow the propellers of a Lancaster bomber to turn – popped out and joined the others in a wooden crate to her left.

Pushing away the tendril of ebony hair dangling in her vision, Fran shifted her foot across to the other peddle, stamped on it and released another plug of aluminium into the drill bed, then repeated the process.

The cream-tiled changing room, which was situated between the two platforms at the bottom of the stairs, was already abuzz with women changing into or out of work clothes. Francesca yawned again. Moving her goggles up to her forehead, she removed her ear plugs. She squeezed her way through the half-dressed women to her metal locker on the far side of the room. Looping her mother’s crucifix out from beneath her clothing, Francesca took the key dangling alongside the cross and slide it into the lock.

‘Cor, I thought that night would never blooming end,’ said a woman’s voice as Francesca opened her locker.

She turned to see Joan Dunn, a jolly blonde who worked on the machine three along from her on the assembly line.

‘At least in the old factory you knew when the sun came up you’d soon be done for the night,’ Joan added, as she opened the metal door of her locker.

‘I know.’ Francesca stowed her goggles and ear protectors on the top shelf. ‘But it was worst for them up top. Still,’ she continued, unbuttoning her overalls.  ‘At least we’ve got a day off tomorrow.’

In the dim light from a forty-watt bulb above, Joan’s blue eyes rolled heavenwards. ‘Praise the Lord.’

‘For what?’ asked Daisy Willis as she joined them from the factory floor.

‘For strong handsome men and gin,’ Joan said. ‘Although I’ve not had much of either lately.’

Francesca smiled. ‘And for a day off.’

‘Oh yes,’ said Daisy with feeling as she removed her goggles. ‘Got anything planned?’

‘Just a date with my bed for about ten hours,’ Joan replied. ‘Then off down the market to join a queue.’

‘Are you after anything special?’ asked Daisy, sliding the straps of her tan-brown dungarees off her shoulders.

‘No. Whatever’s on offer,’ Joan replied, untangling herself from her work clothing. ‘What about you?’

‘I’m having me hair done,’ said Daisy. ‘Then going up West to the Trocadero with a few of the girls from seven section to see if we can catch ourselves a couple of rich GIs.’

‘Well, you watch out that you don’t end up being the one “caught”.’ Joan winked. ‘They don’t call ’em over-sexed for nothing, you know.’

Daisy laughed and looked at Francesca. ‘Why don’t you come with us, Fran?’

‘Oh, I don’t know,’ she replied, lowering her gaze as she stepped out of her boiler suit.

Standing in her knickers and brassiere, Francesca laughed. ‘I’m sure, but I promised to give Dad a bit of a hand in the cafe.’

‘I’m sure he can manage without you, especially –’ Daisy’s eyes twinkled ‘– if it meant you hooking up with some rich American with an Italian grandmother.’

‘It would make his day,’ Francesca replied. ‘But I’ll give it a miss this time if you don’t mind, Daisy, as I don’t want to play gooseberry.’

Her friend laughed. ‘Well, if you change your mind, we’re all meeting at Bow Road Station.’

‘Cor, is that the time,’ Daisy said, shoving her arms in her coat. ‘I’d better dash or I’ll miss my tram.’ She slammed her locker door shut. ‘Have fun and I’ll see yah.’

‘Not if we see you first,’ Francesca and Joan called back in unison.

Daisy waved cheerfully over her shoulder. ‘And don’t forget, Fran,’ she said, gathering up her handbag and heading to the door. ‘Seven o’clock at the station.’

She turned back and unhooked her light blue dress from the peg inside. Slipping her gown over her head, she whipped off her head scarf and shook out her long ebony tresses.

‘You know I used to have hair as long as that,’ said Joan wistfully, as Francesca brushed out the tangles ten hours bound inside a scarf had caused.

Joan’s pale eyes softened. ‘You know, you really should think about meeting up with Daisy and her mates and having a bit of fun up west.’

‘Maybe another time,’ said Francesca, deftly winding one coil over the other as she plaited it.

‘It’s not as if you’ve got a sweetheart,’ Joan persisted as she took her coat from her locker.

‘I know,’ said Francesca, taking her rucksack from her locker and shoving her dirty overalls in it. ‘But I’m just waiting for the right man to come.’

‘I don’t say it ain’t important you find the right one,’ agreed Joan. ’Cos if you don’t, you’re blooming well stuck with ’em until one of you’s pushing up daisies, but—’

‘Which is why I’m not going out looking for him,’ cut in Francesca. ‘And with my brother Giovani in the army, Dad needs me around so I’m happy to wait.’

‘Well, I hope he don’t take too long for your sake,’ Joan said. ‘Because, believe me, there’s nothing quite like having a strong, handsome man to keep you warm at night.’

‘So I’ve heard.’ Taking her three-quarter-length red coat out of the narrow metal closet, Francesca put it on, then closed the door and locked it. She picked up her haversack and turned to Joan. ‘Now, I’d better get my skates on or I’ll miss my bus. See you Saturday.’