Who Do I Think I Am?

I suppose like me you always wondered if there was a grain of truth in all those stories you were told as a child about your family history.  I did but now thanks to the wonder of the internet I’m happy to report that apart from a couple of little things, for the most part, what I was told about my Fullertons forbears was true.

My Nan maintained we are descended from Robert the Bruce. Now wouldn’t that be something but sad to say as far as I can tell we aren’t. However, we certainly originated from the Bruce lands in Argyll; Cambeltown to be precise on Kintyre peninsular. This is where the earliest directly linked Fullerton ancestor, Robert Fullerton come from. Although I have no actual date for his birth must have been born sometime in and around 1640 as his son, Archibald, was born in 1670.

We then follow a list of Johns, Jameses and Allans all in Cambeltown and surrounding areas, until we meet, Allan Fullerton (1782-1865), the last Fullerton to live and die in Scotland. It was his son Allan who moved south to London.  Well, when I say moved south he was actually born in the parish of St George’s in the East Stepney. Allan Fullerton senior is listed as a mariner, which is to say he was a sailor so it seems that although Allan Fullerton senior died in Glasgow in 1865 my great- great-great grandfather, his son, was born while his father was residing in London in 1805.

Although he married Elizabeth Jane Church in 1824 it was his third and last son, Alexander baptism in 1839, who is my direct ancestor. Interestingly, the address given as the family home on his baptism certificate is Martha Street; the same street where, fifty-nine years later, my grandfather was born.  In the 1841 census Elizabeth Fullerton is listed living with her three children in Radcliffe Square. As I can find no such place on any map of the period, Radcliffe Square was probably Wellclose Square but after this there’s no further record of Allan. What happened to him is anyone’s guess but he must have died as Elizabeth married again and produced another daughter some years later.

Alexander married an Amelia Davis in 1849 and they went on to have eleven children including four boys who survived into adulthood and married.  I suspect nearly all of the Fullertons living in East London and Essex are descended from their offspring and their youngest son, Arthur, was my grandfather.

Like the rest of my family I have always felt a strong affinity to Scotland and have visited many times. My first published novel, No Cure for Love, set in 1832 featured the handsome Scottish doctor, Robert Munroe, who had trained at Stirling Hospital.

Of course I haven’t forgotten about my rich Irish ancestors and used their story as the background for the O’Casey and Nolan families in my Victorian novels and my current post-war East London series, Call Nurse Millie, All Change for Nurse Millie and Fetch Nurse Connie, feature District Nurses Millie Sullivan and Connie Byrne but I am returning to my love of all things Scottish when we meet the wonderful Anglo-Indian Hero Dr Hari MacLauchlan in Connie’s second story, Wedding Bells for Nurse Connie, out in May. 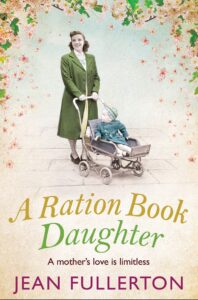