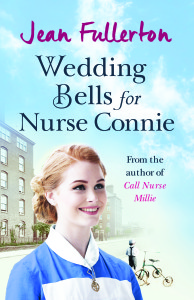 As the early morning July sunlight crept around the edges of the faded curtains, Sister Connie Byrne, the senior nurse for the Spitalfields and Shoreditch Nursing Association, flicked her head in an attempt to dislodge the lock of her golden red hair from her temple, without success.

But then wasn’t it always the same? As soon as you tied your mask and put on your sterile gloves, your nose started to itch or a stray hair tickled your forehead.

Ignoring it she wriggled her fingers in her rubber gloves. ‘Right, Mrs Sinclair, one more push and I should be able to see baby’s head.’

Margaret and Don Sinclair and their four – soon to be five – children lived on the third floor of Fallow House in Brushfield Street just a stone’s throw from Petticoat Lane. The three-room dwellings must have seemed like palaces to the artisans who first moved into them a hundred years before but now they were one of the dozens of damp, overcrowded Victorian tenement waiting demolition under the LCC’s post-war slum clearance programme.

‘Right, Margaret,’ she said, placing the labouring woman’s left foot against her own hip. ‘With the next pain I want you to tuck your chin in and push down into your bottom.’

Margaret nodded then, taking a deep breath as another contraction built, she lowered her head and strained.

Cupping her hand around the woman’s bulging vulva Connie waited for the baby’s head to appear. It did almost immediately, showing Miss or Master Sinclair to have a full head of sticky black hair.

‘Slowly now,’ Connie said in an even tone as she supported the stretching flesh.

Connie’s patient gasped and flopped back as the baby instinctively turned. There was a moment of calm and then Margaret caught her breath again.

‘That’s it,’ said Connie. ‘One more push should see him born.’

Margaret tensed again and cradling the baby’s head with one hand and holding a shoulder with the other, Connie lifted the baby out.

Margaret collapsed back against the headboard. ‘Is he all right, Sister?’

Her son answered for himself by letting out a wail.

Like every midwife Connie had delivered her share of still born babies so no matter how straightforward the labour or delivery she was always thankfully to hear her small patients’ first cry.

Laying the newborn on his mother’s stomach Connie clamped the cord and automatically thanked the Virgin then glanced down at her watch.

Seven fifteen. With a bit of luck she would be back at the Fry House in time for breakfast.

Margret grunted and delivered the afterbirth, which Connie checked then rolled in newspaper to burn on the fire later.

‘What are you going to name him?’ she asked, taking the infant back from his mother and wrapping him in the towel.

‘Stewart. After Stewart Granger,’ said Margret, reaching for her tobacco tin on the bedside table and taking out a roll-up.  ‘I loved him in Fanny by Gaslight.’

Taking the sling and fishermen’s scales from her bag, Connie removed the towel from around the child and gently laid him in the middle of the netting. Looping the corners of the sling onto the hook she raised the scales.

‘Seven nine,’ she said, when the marker settled.

Margret blew out a puff of smoke. ‘And didn’t I know it.’

After putting him in a nappy, Connie dressed the newborn in the well-washed vest and leggings that had been placed ready on the dressing table then she wrapped him in a crochet shawl. He yawned and started rooting around.

Mrs Sinclair pinched out her cigarette and put the stub behind her ear. ‘Give ’im here,’ she said, her rounded face forming itself into a sentimental expression.

Margaret tucked him in the crook of her arm and kissed his damp forehead.

‘Do you want me to help get him on the breast?’

Margret grinned. ‘Ta, luv, but I can manage. And leave all that stuff,’ she said, indicating the pail of blood-stained linen that Connie was just about to take hold of. ‘My sister Vi will be here after she’s seen her kids to school and she’ll sort that out in the laundry downstairs.’

‘Are you sure she won’t mind?’

Margaret shook her head. ‘’Course not. You get on.’ She winked. ‘It’s a big day for you lot down at Fry House, isn’t it?’

‘Too true,’ said Connie, remembering that the good and the great from far and wide were due to descend on Fry House later that morning to drink tea, scoff cake and make interminable speeches. For today, Monday 5th July, 1948, was the start of the much talked about new National Health Service.  From today here on in doctors, nurses, hospitals, medicine, spectacles, visits to the dentist, everything in fact, would be free.

‘I heard there was royalty coming,’ said Mrs Sinclair.

‘No just the Mayor,’ Connie replied. ‘Do you want me to fetch your husband?’

‘You better had or he’ll be late for work,’ Margaret replied.

Connie wrapped her dirty instruments in a cloth before placing them inside her bag, then she went to the door and called for Mr Sinclair.

There was a thump along the small hall and Don, dressed in the paint-splattered overalls of his trade, appeared.

‘Another chip off the old block,’ said Margret, turning the child so her husband could see his latest offspring.

Don grinned and went over to the bed.

‘Allo, son,’ he said, running a calloused finger over the baby’s soft cheek.

‘Coooeee,’ called a woman’s voice from outside the room.

‘In here, Vi,’ called Margaret. ‘But you’ve missed all the action.’

A blonde-haired woman, dressed in overall with a printed scarf tied in a turban on her head, hurried into the room. As Margaret and Vi marvelled at the baby’s small hands and ran through the family members he resembled, Connie packed the last few bits of her equipment away and wrote up her notes.

Don gave his wife a swift kiss on the head. ‘I’ll have the foreman after me if I don’t get on.’

Husband and wife exchanged a private look then Mr Sinclair turned to Connie. ‘Here you go, Sister.’ He rummaged in the pocket of his worn trousers and offered her a ten-shilling note. ‘Worth every penny.’

Connie held up her hand. ‘Bevan’s already paid me.’

Don looked blank for a moment. ‘’Course, I forgot.’ He shoved the money back in his pocket. ‘I’ll raise a glass to the old Welshman later in the Three Feathers when I wet the baby’s head.’

He gave his wife another peck on the cheek then tramped out of the bedroom. The front door banged and Vi rubbed her hands together. ‘Right, then, who wants a cuppa?’

‘Not for me, thank you,’ Connie replied, snapping her case shut. ‘I’ve still got a half a dozen visits before the bun fight starts at eleven.’