Really thrilled to be able to announce the release date and cover of the next book in my East End Ration Book series.

It follows on from the first in the Ration Book Series, Pocketful of Dreams, so you can catch up with the boisterous Brogan family as they face up to the worst the Luftwaffe can throw at them. 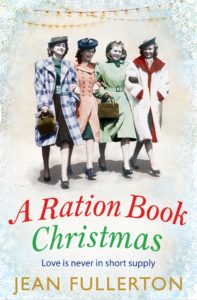 In the darkest days of the Blitz, Christmas is more important than ever. With Christmas approaching, the Brogan family of London’s East End are braving the horrors of the Blitz. With the men away fighting for King and Country and the ever-present dangers of the German Luftwaffe’s nightly reign of death and destruction, the family must do all they can to keep a stiff upper lip. For Jo, the youngest of the Brogan sisters, the perils of war also offer a new-found freedom. Jo falls in love with Tommy, a man known for his dangerous reputation as much as his charm. But as the falling bombs devastate their neighbourhood and rationing begins to bite, will the Brogans manage to pull together a traditional family Christmas? And will Jo find the love and security she seeks in a time of such grave peril?

It will be released on the 11th October but is already up for pre-order on Amazon.

4 Responses to A Ration Book Christmas.